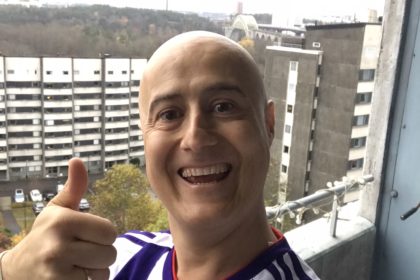 Yesterday the day as I anticipated it came with more things to tell you than in previous days. I had the visit of the ground crew, then I had to go to the embassy to deposit my vote, wait to see how the results of the analytics came out, etc.

Well, on the visit of the ground crew they took my precious red liquid (blood) from my arm. They did it in two different shots, one to take out the 3 classic tubes every Thursday and another at another point on the same arm to extract another tube. The latter was to determine the blood group and do a BAS test. Both with the same objective, determine that in case the transfusion is necessary, avoid problems. This point of transfusion is something that I have been preparing since we started this expedition on September 4. With the lymphoma and chemotherapy received to fight it, it is generated or the body goes into anemia. In my case, hemoglobin values from last week could presage that this week we would go below critical values. Last week my Hb was at 88 g/l and below 80 g/l one or two units of blood should be administered. Well yesterday, against all odds, had not happened on previous trips in this second week, the values rose to 99 g/l, which is very good. Not so much for the fact that they will not do a transfusion, but rather for the fact that it has gone up. Will my diet be almost exclusively aimed at raising iron? Will the injections of G-CSF, which we anticipate to Monday? All together? It will not be known, or at least I will not know how to tell you. Of the rest of the analytical values, the expected. The white series of blood, leukocytes and neutrophils, then in values close to 0. The expected and repeated in these past trips. Week in which I take extreme caution to avoid infections.

The second different thing I did yesterday was to go to the Spanish Embassy in Stockholm to vote. To do this, in order to exercise less, I went by bike, round trip were about 11 km. Once I got there I only received samples of kindness from all the staff that attended to me there. I had told them that I am struggling with this expedition against Hodgkin’s Lymphoma, and that this week the defenses would be very low. Therefore, they told me at what time there is usually less influx of people. In fact it was. At the time they told me, the embassy was quite calm, so I could put my vote in the ballot box for voters of CERA. Thank you for the care. Feeling that native heat so many thousands of kilometers away from your country is appreciated.

And the rest of the day, a little more novel. The night cost me a little more sleep, but I have done it until 5 AM. Moment in which my pains, associated with the administration of G-CSF, have appeared. I have taken a potion (capsule) of oxycodone. We’ll see if I can alleviate it alone with that or after taking more, I have to call the ground crew to manage stronger things or have to call 112 for a special crew carriage to take me to the KS.

The morning rises without rain for now, but with the threat that it will rain. We’ll see if after leaving the gossip at school I will walk or not, it will depend of the evolution of pain. Then it is time to try to work a little and prepare food for food and spend the afternoon like other days until it is time to pick up Gadea.

Dear Diary, for now, this is what I tell you today.